Power sector players got a jolt in January 2019 when Virginia utility regulators rejected the $6 billion grid modernization rate case proposed by Dominion Energy. This “no” followed similar decisions in Kentucky and North Carolina from the previous year. Despite such setbacks, results from Black & Veatch’s 2020 Strategic Directions: Smart Utilities Report survey show that utilities are “all in” on grid modernization plans, and it looks like regulators are moving that way, too.

When asked how much capital they plan to invest in modernizing the distribution system over the next three years, one-third of survey respondents said more than $200 million. That figure is up from 21 percent of respondents who answered the same question one year ago.

The increase likely reflects the maturing of grid modernization efforts and greater attention to distribution grid resiliency. What was once a “nice to have” has quickly transformed into a “must” in today’s evolving utility landscape. During the past five years, utilities were hard at work evaluating innovative technology and running pilots. Now, they’ve secured funding or earned regulatory approval to move forward with a renewed focus on distribution investments.

That’s likely why fewer barriers to modernization show up in this year’s survey results. In the 2019 Strategic Directions: Smart Utilities Report, nearly two-thirds — 63 percent — of survey respondents named budget constraints and competing priorities as their biggest roadblocks, while nearly half, or 48 percent, pinned regulatory hurdles as a problem.

This year, 54 percent said budget constraints were troublesome — a nine-point reduction — while only 37 percent named competing priorities and regulatory issues as their grid modernization headaches.

A lack of resources went up from one year to the next, rising from 29 percent in 2019 to 35 percent this year, indicating that utilities are on the move and need people to handle the work.

Key drivers of grid modernization remained much the same between the 2019 and 2020 surveys. This year, two-thirds of respondents said “improving reliability” was a key catalyst, while 43 percent picked improving operational efficiency as well as addressing aging infrastructure, and 39 percent cited the need to increase monitoring, control and automation capabilities.

In addition to reliability being a key driver for grid modernization efforts, it is no surprise that reliability also tops the list of challenges utilities feel they are facing. Nearly three-quarters (73 percent) of survey respondents named it as a major hurdle, followed by asset management (50 percent) and resilience (49 percent). 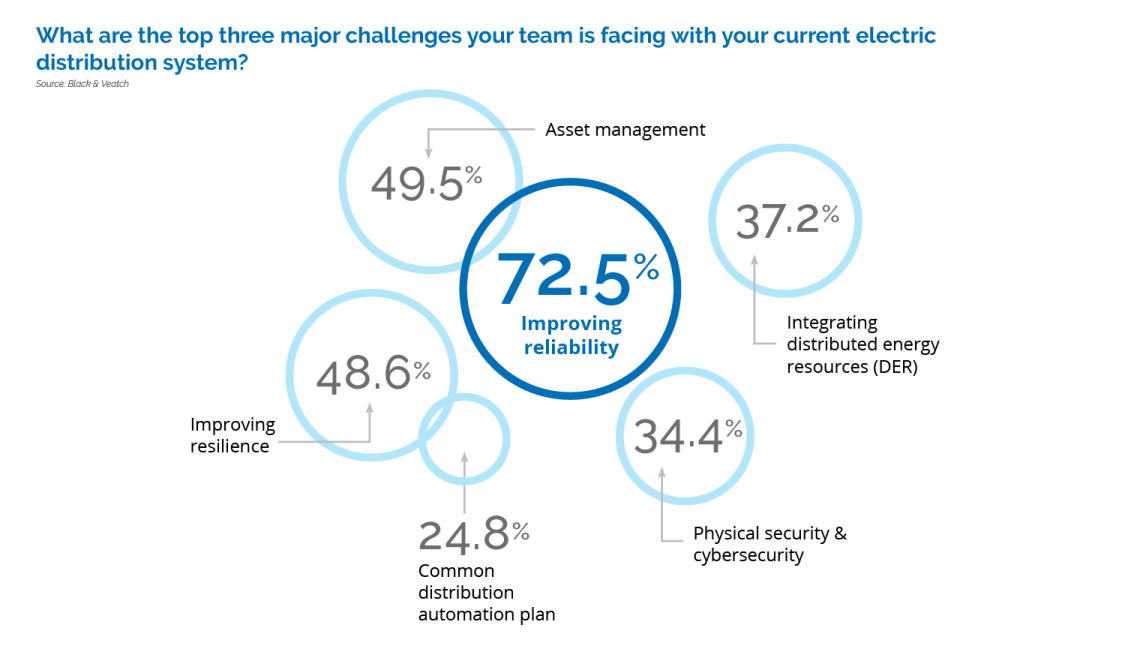 Resilience refers to a utility’s ability to identify and address vulnerabilities that could leave customers without power.

Why is reliability taking center stage? One reason is climate change. Last year, a report from the U.S. Energy Information Administration (EIA) found that average power outage duration nearly doubled between 2016 and 2017, and major storms seemed to be behind these longer service interruptions.

“The future of grid stability may be more tied to weather and climate than modernization, as EIA data paints a picture of an electric system struggling in the face of growing storms,” a Utility Dive article noted about the EIA findings.

A recognition for more robust efforts to proactively improve the grid against the increased magnitude and frequency of major storms has surfaced legislatively in Florida, where the Public Service Commission has introduced Senate Bill 796 (Public Utility Storm Protection Plans) to the Florida Legislature. While efforts to toughen their assets against storms are not new to utilities, this new legislation allows investor-owned utilities to recover costs for such action outside of their rate case, offering greater flexibility. Storm hardening leads to a more resilient system better equipped to keep power flowing when the next hurricane hits and minimizes restoration times.

Along with storms, climate change has contributed to an increase in wildfires, which some California utilities now consider an existential risk. One utility is installing new reclosers on overhead line systems, replacing older electromechanical technology with new microprocessor technology that facilitates remote operation and will allow the utility to disable protection functions during fire events.

Climate change isn’t the only driver of reliability concerns. Customers also are a focus, and many utilities are transforming their business models to those more customer-centric. A century ago, if a customer lost power, the lights went out. But today’s lifestyle is built on electricity — it powers our irrigation systems, mobile phones, smart thermostats, air conditioners, hairdryers, TVs, computers and other electric- dependent assets. With more customers’ lives relying on electric-enabled technologies, expectations for minimal (nonexistent) interruptions are much higher. Electricity permeates every corner of our lives.

Not surprisingly, when this year’s survey asked respondents which technologies are most important to managing the distribution system, many of the top answers were consistent with this focus on reliability.

Supervisory control and data acquisition (SCADA) applications — the power system’s eyes and ears — ranked No. 1. Without them, utilities don’t have visibility into anything on their networks, so it’s not surprising that nearly half of respondents named that as the chief technology for effective distribution operations. 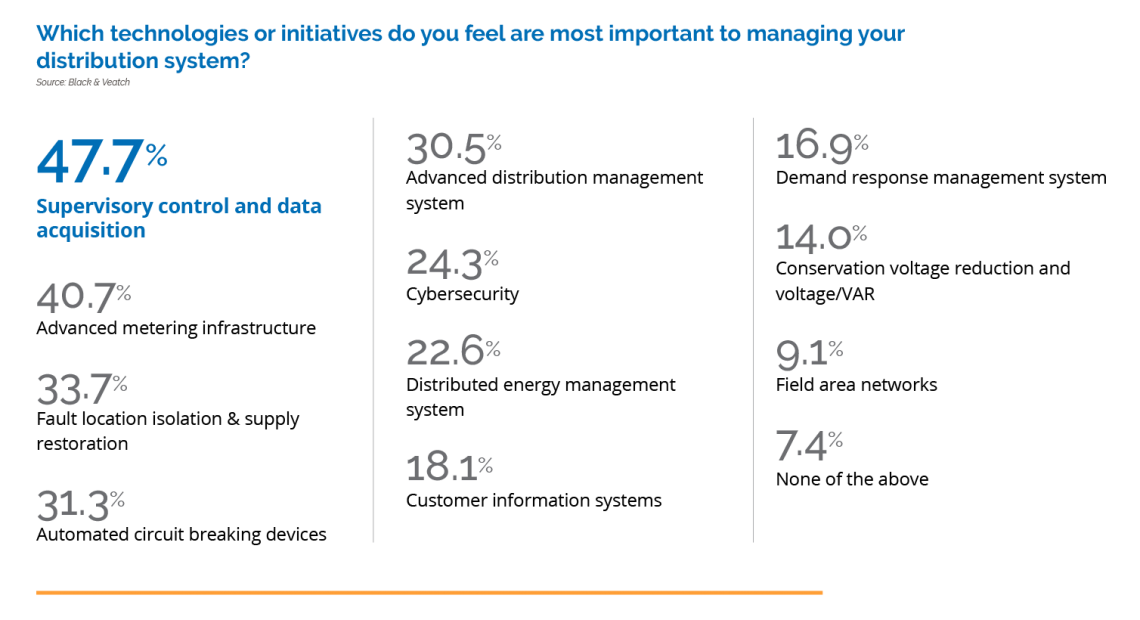 Advanced metering infrastructure, another technology that delivers visibility and intelligence, earned a nod from four of every 10 of respondents, and about one-third named technologies that impact restoration capabilities.

When looking at modernization projects, are utilities pulling the right players into planning talks and deployment teams?

Survey responses would indicate that, yes, they are. Utilities need cross-functional teams for multiple reasons: Insight, impacts, investment trade-offs all come to light when representatives from key groups within a utility come together in the same room.

This cross-functional input is especially important with the increased volume of distributed energy resources (DER) on the distribution system, including those that may not be utility-owned. Worse, many of these DER are variable because they’re driven by the sun or wind, which boosts the need for flexibility, volt/volt-ampere reactive (var) support, load shifting, and greater visibility and forecasting capabilities. With the deployment of new and innovative technologies, operations teams no longer can rely on just themselves to make decisions; there is an increased need for input from other departments such as information technology (IT), telecommunications and cybersecurity.

Traditional generation has remained relatively constant with fewer impacts on the distribution grid, and survey results reflect utility understanding of this.

The planning horizons noted in survey responses also reflect the years already spent in grid-modernization efforts. Right now, more than two-thirds — 69 percent — of respondents are using a one- to seven-year planning framework for documenting their strategic visions. 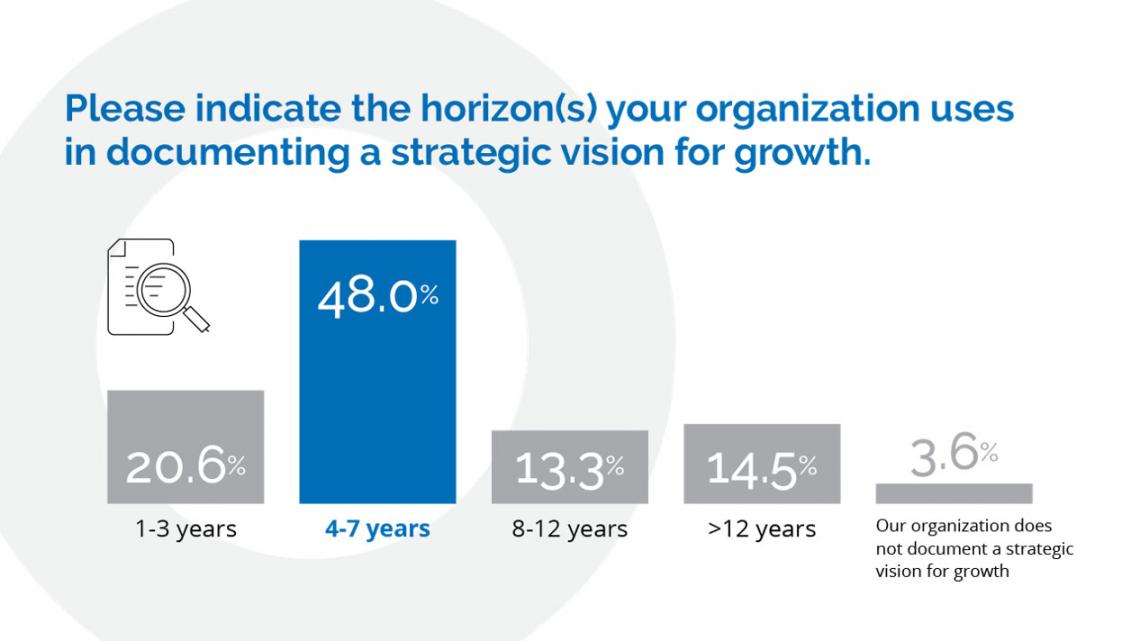 As noted earlier, much of the work done in the past five years was foundational, with utilities focusing on studies, pilots and business case development.

Most utilities have multiple technology implementations and initiatives already in the works. Grid modernization is no longer something utilities are working toward but has become a critical, ongoing effort that is dynamic and much evolving. Pushing planning horizons beyond the seven- to 10-year point may, therefore, deliver diminishing returns on the time and resource investment. Technology continues to evolve — and so will grid modernization activities 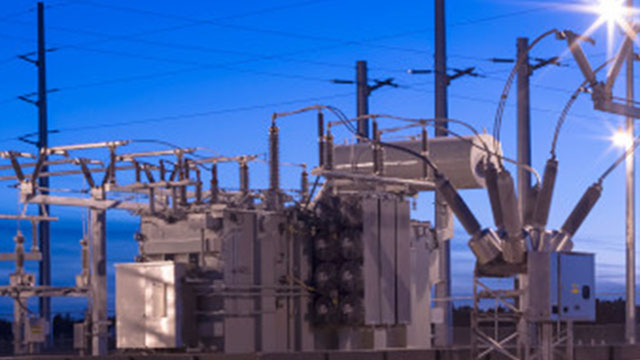 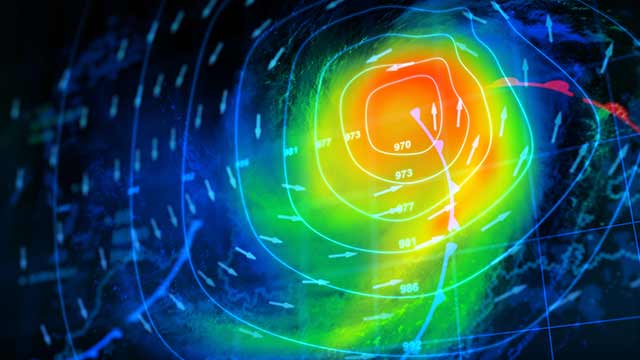 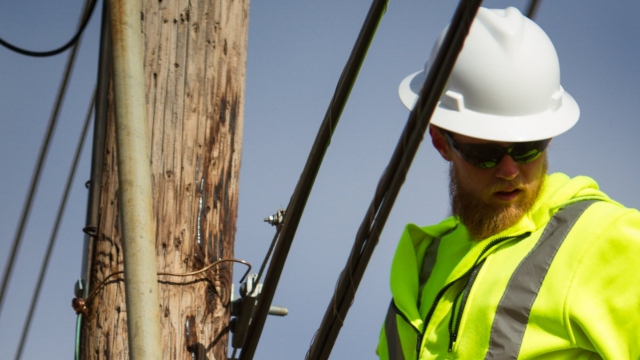